The SLCS Rank Controller is a wonderful piece of software from the talented mind and generous heart of Sayrah Parx. Sayrah’s service to SLCS and kindness to me are both off the charts. I can never thank her enough.

I have some thoughts about the SLCS Rank Controller. Some ideas that could possibly make this engagement logging and motivating device more consistent with SLCS values. Despite having joined a long time ago, I am extremely new to SLCS. I honestly don’t know much and understand less. My ideas could be wrong or problematic. Even if my ideas do have a bit of merit, I don’t mean them as a critique of Sayrah’s generosity or talent. Nonetheless, every time I see the Rank Controller, which is every day, it grates a bit. And so, here are some thoughts about this fantastic, but perhaps still possible to optimize further, device.

When I returned after my 10 or 11 year absence, the SLCS Rank Controller informed me that I would reach Sr. Co-Captain in a few hundred years:

I’ve been a bit more active since my return! Now the SLCS Rank Controller thinks I might get there in a few weeks instead of a few hundred years:

The SLCS Rank Controller is a Gamification device. Gamification is using game mechanics to promote progress and productivity. You can gamify your household chores, your club, or your business.

I think gamification in education might be a better model than the one we have now. If you get 60%, you typically get a “D” on the assignment or in the class. When a Quest Master askes you to go fetch 5 young thistle boars and you come back with 3, you do not get a “D”. You are simply asked to go fetch 2 more. Instead of people punished with low GPA’s and incomplete mastery, we only “level up” people with complete mastery. How short or long that takes varies by the individual and their circumstances. As the SLCS Rank Controller noted above, I would be an example of extremely slow leveling up! 😛

The Rot of Capitalism

At it’s best, Gamification can be fun, motivating, and productive. Gamification can also displace motivators. Gamification, like Capitalism, and like Points & Grades in school, has a tendency to replace intrinsic motivation with extrinsic motivation. You start a career out of passion and dreams (intrinsic motivation) but over time lose your focus and obsess over money, status, and power (extrinsic motivation). Students go to school with lofty ideas like building careers and becoming a more complete human being. Over their years in school the relentless drumbeat of teaching to the standardized test pushes students to focus on the extrinsic, fantasy world of points and grades as if they were real or mattered. And they can lose sight of why they went to school in the first place.

This is a real problem. But I think not a problem with the SLCS Rank Controller. If you join SLCS at all, it’s reasonable to think that your desire is to engage and participate, and the Rank Controller logs and rewards exactly that.

I am not fond of the term “Rank Controller”.

To me “Rank” suggests a military hierarchy. In my recent Is Cheerleading a Sport? blog post, I argued that Cheerleading is the opposite of War and Military. Military is about conflict, combat, dominance. It is a zero-sum game. I win, you lose. Cheerleading, to me, is about family, community, participation, inclusion, and inspiration. Cheerleading is a non-zero sum, or win-win game. We win together.

To me “Controller” suggests an authoritarian environment. Philip Rosedale recently returned to Linden Lab. One of his first acts was to sit down with Strawberry Linden for a “Lab Gab”. In their conversation he talked about Facebook’s Surveillance Capitalism and Behavior Modification business model. He argued that SL’s business model of charging fees for things like land and transactions was a better, more human, more sustainable business model. He strongly argued against an authoritarian dystopia of control that is “free” but where the real price is your soul and your free will.

Instead of a militaristic and authoritarian title like “SLCS Rank Controller“, can we call it something like the “SLCS Experienceometer” or the “SLCS Cheertopiometer“?

My rank is currently Jr. Lieutenant. Thanks to the Rank Controller I understand that SLCS currently has 6 levels, with 6 degrees per level, for a total of 36 degrees:

I loved seeing the word “Cheerleader” above my head. Or sometimes over my face! 😛 There is no word in the English language I would rather see hovering there. To be honest, as I reached 4 and 5-star Cheerleader I tried to hang out at the stadium a bit less to stretch out the time that I carried this wonderful word and not the dreaded term “Jr. Lieutenant”.

As I’ve described above, I see Cheer as the opposite of war and military. Yet the Ranks, or Levels, or Grades of SLCS: Jr. Lieutenant, Lieutenant, Co-Captain and Sr. Co-Captain are clearly based on a military model.

Why should participation, contribution, achievement, and mastery in a family, community, inclusion, engagement, and inspiration organization like SLCS be based on Military Ranks? I don’t mean to be overly dramatic, but I find the levels of Lieutenant and Co-Captain distressing. I just can’t square them with what I believe SLCS is about.

The Second Life region where Srooc Skytower Memorial Stadium lives is called Cheertopia. I don’t know the history of the region or how the name was created. I’m imagining that Cheertopia is a portmanteau of Cheerleader and Utopia. What a perfect name! I believe that the values of Cheerleading are Utopian in nature.

War is dystopia on earth. We don’t want to live in Cheerdystopia. Why, then, have a level system based on the dystopian values of war? Why not embrace our truest, deepest, Cheertopian values when we choose words for our level system?

The Belt Colors in Martial Arts are like the Ranks at SLCS.

The Dan, or Degrees of a Belt are like the Stars of each SLCS Rank.

What if we let go of a military model for participation in SLCS and adopted levels and degrees similar to Martial Arts? Instead of Colored Belts, we could have Colored Pom Poms.

Our beautiful SLCS uniforms include multicolored pom poms. Perhaps we could also have a set of pure White, Yellow, Green, Blue, and Black pom poms. At some practices, everyone could wear whatever the uniform of the day is, and use the pom poms of their current SLCS Experienceometer level.

The circle is now complete.

I love the idea of walking down the street, seeing a person in a white belt, and not knowing if she is a complete beginner or a master’s master.

Whether we call the 36 levels and degrees of SLCS “Jr. Cheerleader, Cheerleader, Jr. Lieutenant, Lieutenant, Co-Captain, Sr. Co-Captain” or “White, Yellow, Green, Red, Blue and Black Pom Poms”, or anything else, I would love to have us add a 37th Dan, “Cheerleader”.

I would love to show up to practice and see the pom pom colors of the different levels working together. To see novices and masters both with “Cheerleader” above their head. Both holding white pom poms.

We shall not cease from exploration
And the end of all our exploring
Will be to arrive where we started
And know the place for the first time.

Even if you put the military associations aside, I know I am not Lieutenant material. I am not, and don’t ever expect to be, a Captain. I am the only thing I ever wanted to be, a cheerleader. 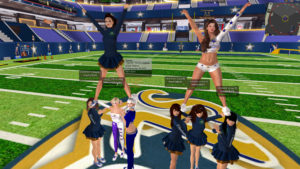 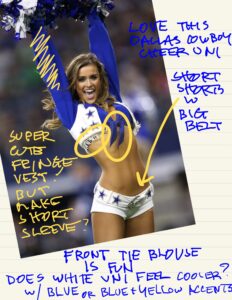 Next post A Cool Cheer Uniform 4 a Hot Summer

I love walking around and seeing what the many different creative minds of SL have dreamt up. I’m fascinated by traces of the human in SL. I love SL’s many elaborate train and tram routes. It’s incredible that people have built tracks through such long and diverse regions of the SL mainland. I love Guest books! It’s so great that you can wander by someone’s small, cozy parcel and leave a little note that you were there. And read notes from others who have made this similar discovery at some earlier time.  I love SL memorials and cemeteries. They’re bittersweet to be sure. But a world that appreciates lives lost, also appreciates lives being lived. It’s an incredible virtual world!