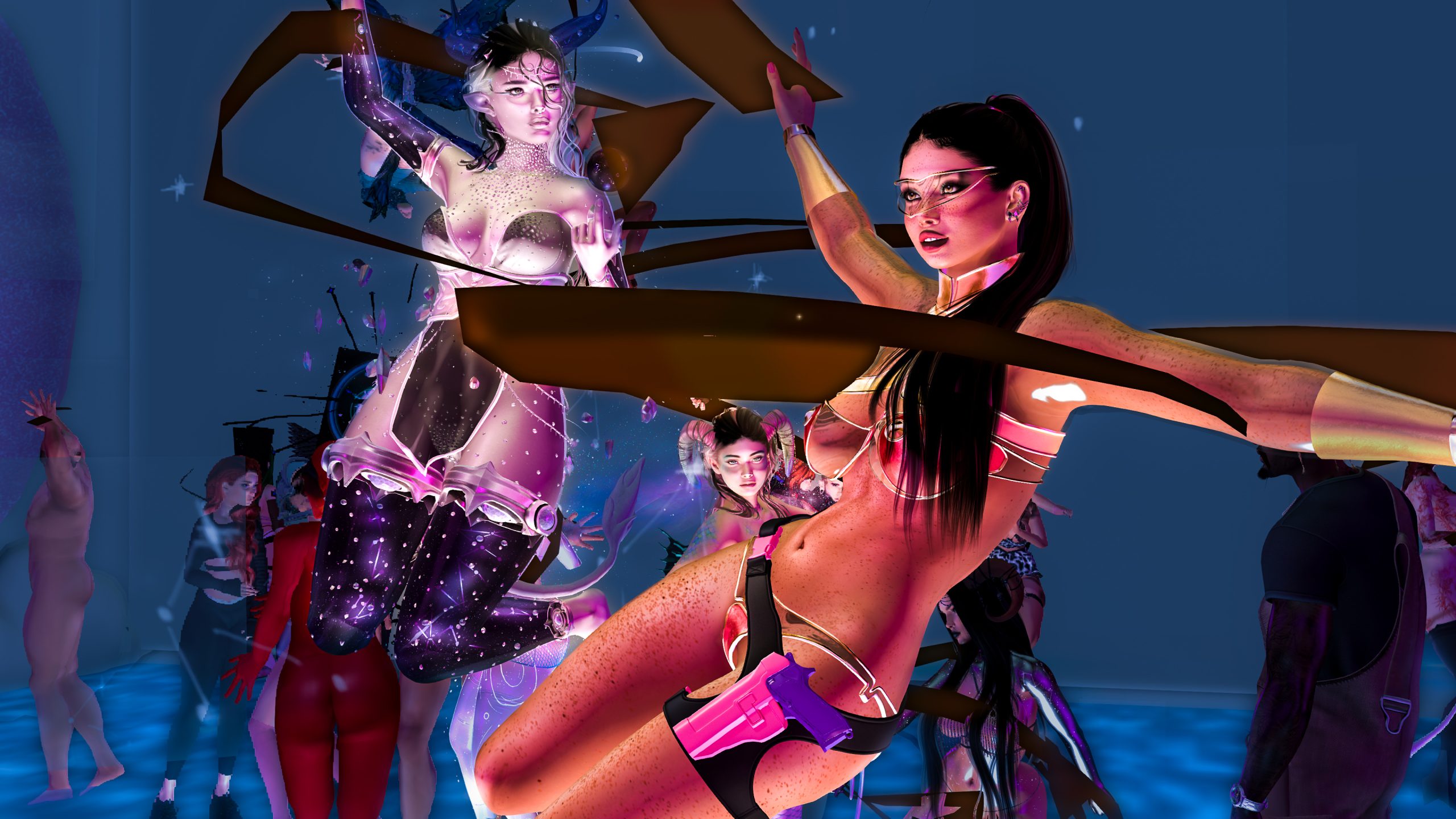 When I was at Peak Lounge dancing with Cherry & Agnes we started talking about dance & music places we liked. I immediately mentioned Nuit as the most unique club I’ve experienced in SL. And then realized I haven’t been there in ages.

Nuit is only open 3 hours/week. 6 pm to 9 pm on Saturday. I tried to TP over around 6 pm and got a “Sorry, Region Full” message. I know some peeps hate these messages, but I feel like they’re doing me a favor. Rushing in to 0 FPS just isn’t that fun. Unfortunately, it’s been right around 1 million degrees here in the PW lately. Luckily, I have a swimming pool. So I went out and swam laps for an hour. Then I tried to visit Nuit around 7:30 pm and got right in. Me and 90 other avis!

I stood in the back for a minute. Marveling at all the orange clouds. Orange clouds that eventually gave way to misshapen mesh-less bodies and heads. Rather than wait half hour to see what I might see, I just plowed into the crowd and started dancing. I was mixing up various dances and “floating” animations. And who should be floating right next to me? Honey Mercury. After a while I just went for floating and happened to run the same animation that Honey was, so we floated in sync for a while. And chatted a bit.

Next I noticed this beautiful mermaid, Finn. I didn’t look at their last names and didn’t realize that they were both “Mercury”. I chatted with Finn not realizing I was also chatting with her GF.

In all the visual splendor I failed to look one more person over and didn’t see that the 3rd part of the “Trouple”, Nirea Mercury was also there. Oh, and Nirea created Nuit!

SL “nuit” group: The official group for club nuit. Notices for our shows will be posted here!

After telling Honey how amazing she looked, I had to ask if she’d glued the rhinestones all over her body by hand. She had! I said what a project taking them all off would be. Honey commented that she’d just have here girlfriend(s) do it.

I said it was worth it for how amazing she looked. And Honey said,

I wish I could say the same about you, but I have to go to friends only when I’m here — lol — but I’m sure you look amazing as well!

The whole time *I* had been dancing/floating “with” Honey, *she* didn’t even see me in the room. Oh the magic of our mediated media age!

And I learned that at the bottom of the Firestorm World menu is “Show Friends Only” which does exactly that. Must be crazy helpful for FPS at a mega-crowded spot like Nuit!